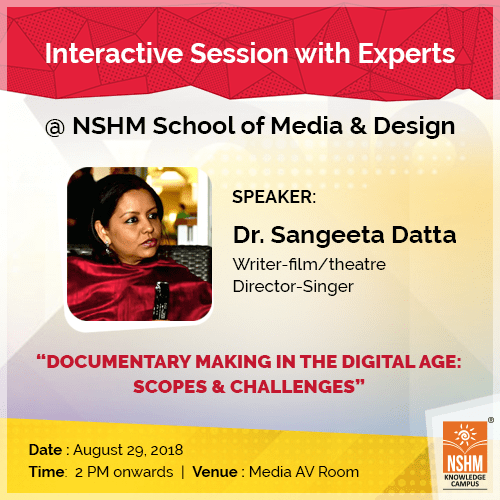 NSHM Knowledge Campus aims to get the students closer to the realities of the industry they want to start their career in. In pursuit of such insights, the School of Media and Design is proud to present a special meet and greet with world renowned documentary film maker Dr. Sangeeta Datta.

Dr. SANGEETA DATTA wears many hats and can easily be called a polymath. As a Director and Producer she is known for her work in award winning productions which include

She is also a Writer who has numerous publications on Film and Literature in international academic journals. Apart from that she has also written books on cinema like
As a trained Rabindrasangeet singer, Sangeeta performs regularly.  Her recent concerts were

She is director of the arts company BAITHAK UK which promotes, dialogue, debate and new work from performing arts, literature and film. This year BAITHAK presented a highly acclaimed panel on Indian Cinema at BAFTA (British Academy of Film and Television) featuring Javed Akhtar, Shabana Azmi and Farhan Akhtar.

A PhD in English Literature, Sangeeta has many years of teaching and curating experience behind her both in India and in London. She curates film seasons at British Film Institute and is a cultural commentator on radio and TV.

This special interaction will enable students to understand the finer nuances of documentary and film making from the point of view of a person who has been at the helm of affairs internationally. So spread the word and join in to experience knowledge upfront.